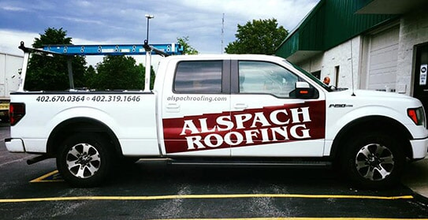 Here for all your roofing & gutters needs

Family owned and operated since 1991

Since 1991, Alspach Roofing in Omaha, Nebraska, has been supplying the area with roofs and gutters. Mike Alspach has been working in roofing since he was 14 years old. He began working with his uncle and realized that he could make an honest living off of roofing and gutters. When he got older, he was able to design and build his own home. He then built his business from there.

His son, Josh, now works for Alspach Roofing and is part-owner. He began working with his father when he was in high school. As he grew older, some of the responsibilities of the business became his. He was able to help the company grow. Being part-owner of the business also allowed him to fulfill his passion for helping others by allowing him to become a paramedic as well.

Josh never knew what he wanted to do with his life and bounced from one thing to the next. He asked God one evening what he should do with his life. At that moment, an ambulance drove by and the plan hit him like a ton of bricks. The next day he set things in motion to become a paramedic. He started with becoming an EMT and finished Paramedic School and certifications in 2013. Josh still takes his responsibilities with Alspach Roofing very seriously and is still a huge part of operations.

We will provide you with a full consultation to explain all of your available options so that you can choose the roofing plan that’s right for your home or business. We will work with you and adhere to your personal needs.

“I love that they are local, family-owned, and will do what is very best for their customers. 10/10 for Alspach Roofing!“

We strive to save you both time and money by combining our use of roofing knowledge, the highest quality parts and equipment, and our dedication to delivering exceptional service. We will not leave the job until it is finished and you are satisfied.

Get A Free Quote

To get a free quote, please contact us at your convenience.  We look forward to serving you.